It is finally that time of year again for sports fanatics, March Madness! This year’s tournament should be a very fun one with multiple upsets, highlight plays and elite competition. The first four games will tip-off on March 15th and will run up to the championship on April 4th. The final four and championship game will be held at the Caesars Superdome in New Orleans, Louisiana.

All the normal tournament practices return this year after their brief hiatus from last year. 100% capacity is back as well as games spread out across the country. Last year games were only played within the Indianapolis Metro Area. 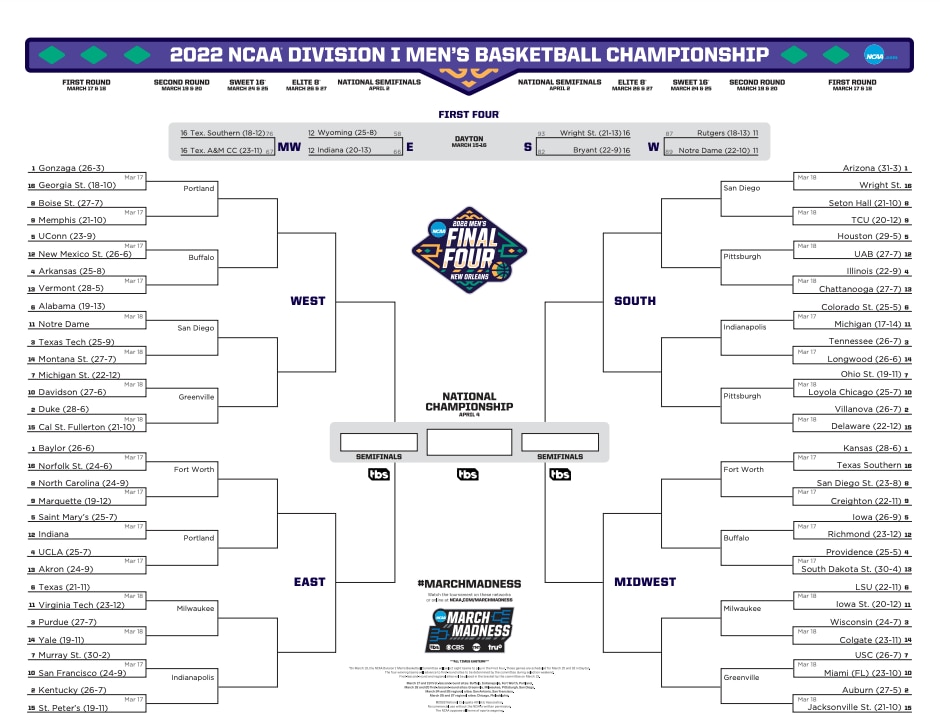 Games can be viewed on truTV, CBS, TBS and TNT

Like last year the Gonzaga Bulldogs return as the #1 seed to the West region and the #1 overall seed, additionally the Zags have been picked as the favorite to win the entire tournament. Gonzaga is coming off another West Coast Conference Championship. With help from forwards Chet Holmgren and Drew Timme, the Bulldogs look to avenge themselves from last year’s national championship.

#2 Duke, #3 Texas Tech and #4 Arkansas will be looking to take down Gonzaga and have a big tournament run for themselves. Keep an eye out for star players such as Duke’s Pablo Banchero, Arkansas JD Notae, and UConn’s Adama Sanogo to have big games to help carry their teams.

One team that possesses a legit upset threat is the 12 seeded New Mexico State Aggies over the 5 seeded UCONN Huskies. The Aggies are coming off a Western Athletic Conference championship and always seem to play well in March.

Team to watch for: Davidson Wildcats. The Wildcats are coming off an Atlantic 10 Conference Championship and are playing some of their best basketball. Davidson gets success from their slowly developing, methodical plays ran by the offense. Against a weaker West region, Davidson has a chance to run the table.

West Region Champ: Gonzaga Bulldogs. Bearing any crazy upset the Bulldogs are a lock to win the West Region. They are much more talented and have better coaching than any other team in this region.

The South Region welcomes the Arizona Wildcats as the number one seed. With a record of 31-3, the Wildcats are playing some phenomenal basketball, especially against big-time opponents. One interesting thing about this Arizona team is they are they average the tallest players and play some of the fastest basketball in the NCAA. With contributions coming from Dalen Terry and PAC-12 Player of the year Bennedict Mathurin should help the Wildcats coast to a national championship appearance.

#2 Villanova, #3 Tennessee and #4 Illinois all look to challenge and dethrone the Wildcats and certainly have the power to do so. The Tennessee Volunteers have been very hot late in the season thanks to an SEC Championship for the first time since 1979. Houston returns as a #5 seed after a miraculous final four run in last year’s tournament. Villanova’s Collin Gillespie and Illinois Kofi Cockburn will have to have big performances to continue to advance their teams further in the tournament.

South Region Champs: Arizona Wildcats. With Arizona’s size and speed, they will be hard to take down. Not many teams can run with the Wildcats and that is why they should move onto the final four.

This year’s East Region number one seed is the 2021 National Champions Baylor Bears. Baylor has had some impressive wins against quad one opponents such as Villanova, Texas and Kansas. However, Baylor suffered a shocking defeat in the opening round of the Big 12 conference tournament. Guard James Akinjo and Forward Jonathan Tchamwa Tchamwa will need to play elite-level basketball to thrust the Bears forward in the tournament.

#2 Kentucky, #3 Purdue and #4 UCLA all look to take a shot at Baylor and move on. UCLA is coming off a great run-in last year’s tournament that resulted in a final four appearance. This side of the bracket sees some of the most elite players in basketball this year. Kentucky’s Oscar Tshiebwe and Purdue’s Jaden Ivey should have great games and thrive with their respected teams. Murray State is entering the tournament as a seven seed which is their highest seed in the school’s history.

Many experts have the 12 seeded Indiana Hoosiers causing some chaos in the bracket. The Hoosiers have notched wins over Ohio State, Purdue and Illinois. Indiana played in the Big 10 conference championship where they came out on the short end of the stick against Iowa. Many feel that their opponent the 5 seeded St. Mary’s Gales are quite overrated with their 22-7 record. Indiana has a great shot at making a deep run if they can put it all together.

Team(s) to watch for: North Carolina Tar Heels and Virginia Tech Hokies. Do not let these low seeded teams trick you, they are great teams and getting hot at the right time. North Carolina finished their season on a high note, blowing a great Duke team in Coach K’s last game. Virginia Tech is coming off a historic run in the ACC tournament resulting in an ACC Championship.

East Region Champs: UCLA Bruins. With Baylor being the weakest number one seed, the UCLA Bruins should be able to take advantage of that. The Bruins return many of their players from the 2021 team that went to the final four.

The Kansas Jayhawks once again comes into the Midwest region side as the number one seed. Kansas took care of business in the Big 12 Conference tournament, winning yet again another conference championship. After losing in the round of 32 last year, Kansas is eager to get their revenge by making a deep run. In the regular season, Kansas has picked up top wins against Texas Tech, Iowa State and Baylor. The Jayhawks are led by Ochai Agbaji and David McCormack.

#2 Auburn, #3 Wisconsin and #4 Providence all come in as the top seeds. All three of these teams will need to play at the elite level to advance their teams forward.

Team to watch for: USC Trojans. USC had an epic run in last year’s tournament as a six seed that resulted in an elite eight appearances. The Trojans return many of their players from last year’s team. USC went undefeated in non-conference games and finished with a loss in the semifinals of the PAC-12 conference tournament.

East Region Champs: Kansas Jayhawks. Kansas has a relatively easy path to the final four with the other top seeds potentially getting upset. Kansas’s elite play on offense and Ochai Agbaji playmaking abilities should be all the Jayhawks need to run the table.

In my Final Four, I have #1 Gonzaga playing #4 UCLA and #1 Arizona playing #1 Kansas. I believe that both Gonzaga and Arizona will win their matchups and face off in the National Championship. In a close game, Arizona should take care of their business and cut down the nets in New Orleans.